Recently I’ve been doing a lot of large disk forensic imaging. I usually use Linux-based systems for forensic imaging. A normal case would be physical imaging of a source to an ext4 formatted destination. I would normally get about 120MB/s imaging speed, depending on the source disk.

One day I was asked to save image files to an NTFS destination for compatibility with Windows. Regardless of source, I kept getting 33MB/s imaging speeds on Linux (Ubuntu) to an NTFS destination. Trying to figure out what was going on, we found the NTFS-3G driver is a major problem. The FUSE-based driver is both slow, and appears to use a lot of processing power.

The best description of this problem can be seen in Figure 1 below. In the top right graph, the yellow line shows the NTFS-3G driver speeds; exactly what I was seeing. 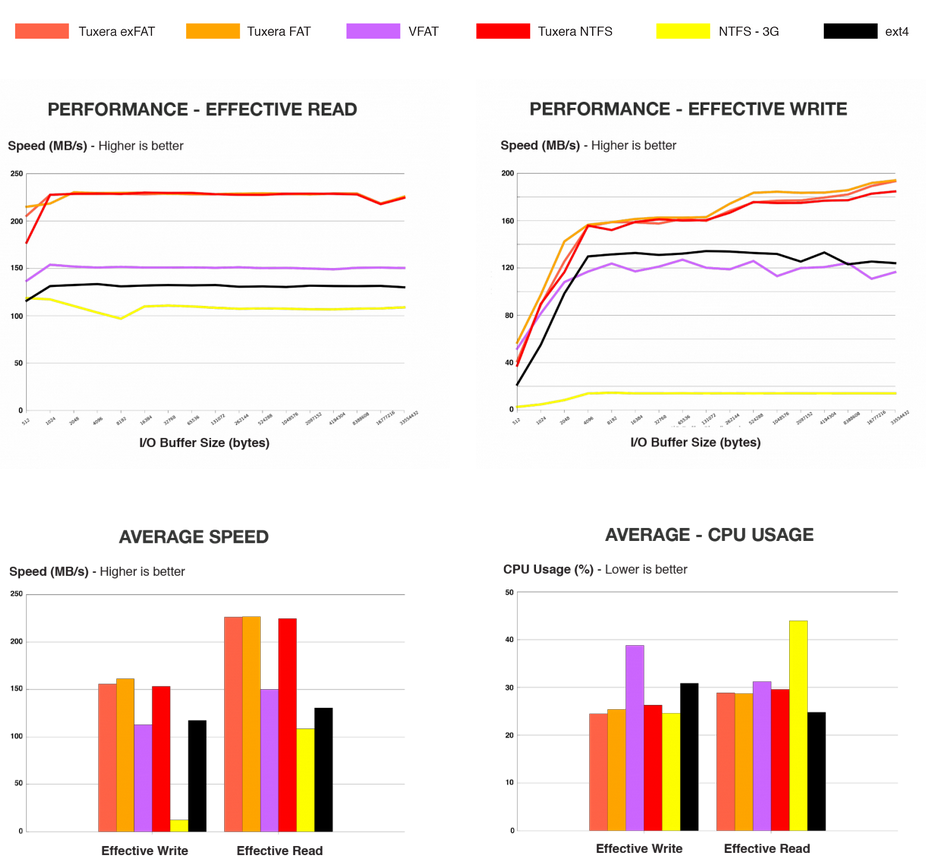 Tuxera contributes to the NTFS-3G driver, and also sells their proprietary driver. I asked for a quote, and there is no practical licensing options for a small forensics lab.

The speed and processor issues writing to NTFS made me think a lot more about optimization of writes for all file systems. Specifically, disk imaging where a large, compressed images needs written to a destination as fast as possible.

At this stage, I suspect that - for disk imaging - raw writes to a destination with no traditional file system would be much more efficient for disk imaging. If we write something like a partition table to the beginning of our RAW destination, we can keep track of the disk images. After that, we can access the data directly on disk at the speed of the hardware.

Before trying to develop something, I need to do a lot more research. I’ve seen some forensic file systems described before, but could never get them installed. If anyone knows of prior work, please send it to me at @DFIRScience.

Next, I need to collect more objective measurements in our lab. An interesting blog that talks about file system latency measurements can be found here: File System Latency. The author is testing a MySQL server, but the testing method seems relevant.

iostat is a computer system monitor tool used to collect and show operating system storage input and output statistics. It is often used to identify performance issues with storage devices, including local disks, or remote disks accessed over network file systems such as NFS. It can also be used to provide information about terminal input and output, and also includes some CPU information.

DTrace is a comprehensive dynamic tracing framework created by Sun Microsystems for troubleshooting kernel and application problems on production systems in real time.

With this beginning information, I want to better understand the overhead of FS drivers. I focused so much on file system investigation, I wasn’t really thinking about write optimization during imaging. Time to begin!

DFIR Science has launched a new course on learn.dfir.science on how to Collect and Analyze Random Access Memory.

Random Access Memory forensics starts with acquiring RAM from a live (turned on) system. There are several ways to collect the contents of RAM from a compute...

The DFIR Science YouTube channel was nominated for the 2022 Forensic 4:cast Awards under “DFIR Show of the Year”!

Huge DFIR stream with a lot of Q&A. Check out the chapter times below!